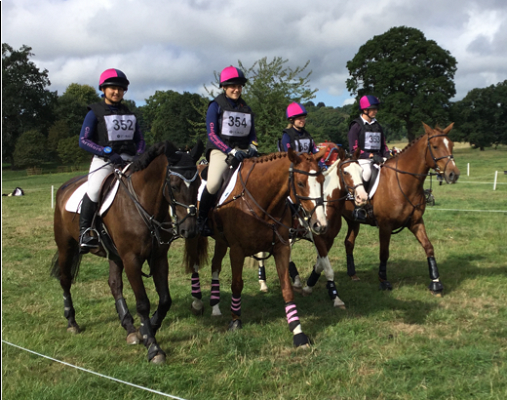 So now all our competitors are back from the National Championships in the grounds of the beautiful Cholmondeley Castle in Cheshire, we thought it was time that we let you all know how they got on.

First up on Friday was our Novice Show Jumping team who had done such a good job at Wellington to secure a team 3rd place and a qualification to attend Champs. The team was made up of Heather on Teddy, Emi on Flash, Miya on Bailey and Flo on Bunty. The first round was in the Castle Arena where they secured three clear rounds with Bailey knocking the last. This put them in an excellent position going into the second round in the Main Arena where Miya, Flo and Emi all knocked a pole each but Super Ted was one of the few riders to secure a clear round. With a finishing score of just 8 faults the team came 8th out of 52 teams. Teddy definitely won Pony Of The Champs as he jumped his little socks off and left more than one of us with a tear in our eye.

Saturday morning dawned with Emily K and Lily ready to perform in the Open Dressage in an Area 13 Combined team. This was a big step up for them both and Emily did a great job to keep this mare in check. It wasn’t their best result but the mixed team came 25th out of 33 teams.

Also up on Friday were our two PC90 competitors, Emi AB and Livi H with Cooper. Livi and Cooper scored a respectable 39.8 dressage, were clear in the show jumping but unfortunately had a stop and an involuntary dismount on the cross country to pick up 85 penalties.

Emi did a very nice dressage to pick up 32.8, was also clear in the show jumping but speed was a bit of an issue in the cross country so they picked up 11.2 penalties for being too fast. They did however manage to finish in 15th position, so a great result for them.

Our camping area was filling up fast with about 8 different CFPC families attending and Steve and Alex did a fabulous job of providing everyone with a BBQ on Saturday night.

Bright and early on Sunday morning our Intermediate Dressage team of Emily and Buddy, Anna L and Pippin, Eloise T and Duke and Liv R and Alfie were up plaiting and scrubbing their horses to within an inch of their lives. They were beautifully turned out and calm and collected in the warm up, although Alfie did threaten to lose the plot once or twice. They all did, in our humble opinions, winning tests and were fault free from where us, as spectators, were standing but the judging was fairly harsh. The team did an amazing job however to finish 16th out of 29 teams with Eloise coming a brilliant 7th in her arena.

Next to compete on Sunday was Liv H and Copy who qualified for the Intermediate Individual Show Jumping. Both of Liv’s rounds were held in Ring 1 just behind the main arena and the fences were certainly up to height, especially in the second round. Liv rode a superb clear round and Copy showed what a great horse he is by putting his heart and soul into his jumping. They had an unfortunate pole in their second round to give them a costly 4 faults. They finished 17th out of 73 competitors with the quickest 4 fault round.

Monday morning was the turn of the intermediate showjumping team which consisted of Liv H, Hannah AB, Jeremy and Livi H this time with George. Their first round was at about 10.30 in Arena 2 with a really full up course with some tricky fences and lines. Liv H was first and did a faultless clear round. Jeremy and Livi H both had an unfortunate pole each and Hannah AB was also clear. This was a timed round and they were all quite quick which put them as the fastest 4 fault round going into the second round. Sadly they ran in reverse order so they didn’t jump again until about 6.30 by which time the horses, and the riders, were tired, hungry and a little fed up. Liv H picked up 8 faults as did Jeremy, Hannah had just the one pole and Livi uncharacteristically, had 3 down. Bear in mind that George was probably one of the smallest horses in the competition and was jumped ENORMOUS fences!! They still finished a very credible 16th out of 37 teams.

Before we knew it the last day had arrived and it was time for the PC100 eventing competition. Three of the same ponies who competed in the Intermediate show jumping, with the exception of Copy, were pulled out of their stables VERY early to be plaited and made to look beautiful as the first of their dressage tests was at 8am. Emily K and Buddy made up the fourth member of the team. All four of them did really good dressage tests against other very competitive teams. Livi H scored 34, Hannah 38.3, Jeremy 36.4 and Emily 31.9. Next up was the show jumping which after the huge fences yesterday appeared tiny!! Livi and Jeremy walked away with clear rounds whilst Hannah and Emily both had an unfortunate pole. Finally, the fun discipline!! The Cross Country course was beautiful. They had been lucky to have had quite a bit of rain up there so the going was fantastic. The course was tricky with some tough lines and questions that our riders had not faced before. They all took part in the course walk the night before with the NFU Mentor Marie Ryan and took on board her suggestions for taking the alternatives at a couple of fences. Livi and George were off first and did a cracking clear round picking up 2.8 time penalties – those little legs of George’s just couldn’t quite make the pace. Hannah and Jeremy both had clear rounds inside the time – Jeremy was actually one of only a handful of riders to receive a rosette for double clear. Emily and Buddy set off last but unfortunately had a parting of the ways at the coffin – a tricky fence with a big hanging log downhill to the wide ditch. Sadly their day was over but they both walked away uninjured – other than a bruised chin and their pride. Livi H finished up 10th in her arena, a huge achievement for such a diminutive little horse.

Massive congratulations to all the horses and riders who took part in Champs. You were all amazing and we are incredibly proud of you all. Onwards and upwards to next year.